Yachting, sailing for beginners
For certain many of you who anyway connected the life with the world water verses know what the anchor is. Besides, skilled seamen will be able to spread out without effort on shelves the main pluses and minuses of the anchors intended for the different purposes. And no surprise there, after all the matter is a question of safety of the vessel and safety of passengers on its board. Today we would like well and without excess terminology to tell fans of the sea travel about what is the anchor and which of them exist. Even if you don't plan independently to operate the yacht and to come to anchor, this information for certain won't be for you superfluous.

Before mentioning in detail about classification of anchors and the review of their design, it would be for a start quite good to understand for what in principle the anchor is necessary? The answer is quit simple – the anchor is urged to provide the steady parking of the vessel on raids and in the high sea with depths, available to it. But there is more to come: the anchor device is also irreplaceable during mooring in the conditions of the extremely adverse weather, for example storm. 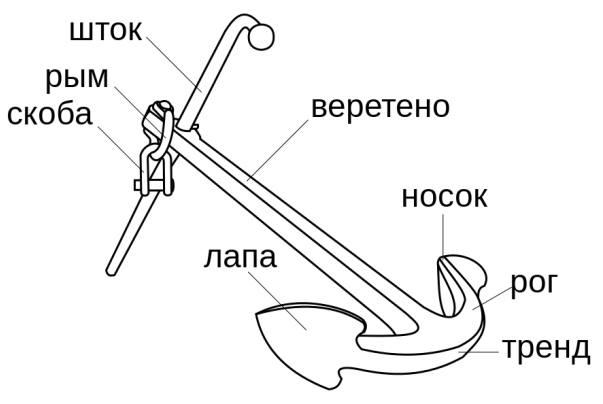 In a design of a classical anchor, for example, Admiralty, there are following elements: longitudinal core (spindle) which is an anchor basis. In the top part of a spindle there is a bracket, intended for fastening of an anchor to an anchor chain, and also horns in the lower part which pass in paws with edges — socks. Horns not movably fasten to the anchor basis, and knot of fastening is called the trend. The lower side of a trend is called a heel. In some anchors for increase in coupling with soil there is a rod — the core focused across a spindle.

Further we suggest to examine the most widespread types of anchor devices for today, and also briefly to describe their pluses, minuses and features.

Pros. Not bad keeps in sand and in silt.

Cons. Badly takes solid soil, can lie down sideways and creep. Has the small size of paws that negatively affects the holding force in comparison with more modern anchors.

Pros. This anchor represents direct analog of CQR, but with only one difference – there is no hinge in it connecting a spindle and paws. Despite refusal of the hinge, comparative indicators of a fence of this anchor became significantly better on all types of soil.

Cons. Same, as at CQR

Pros. Perfectly copes with a task for which it was developed. Namely - statement on an anchor of big oil platforms in water areas with sandy or oozy soil.

Cons. The majority of tests in which Bruce was involved, recorded rather small holding force.

Cons. At a swing of the vessel standing on this anchor there can be a situation, at which anchor can be pulled out from soil by the anchor end which got between paws. The long spindle complicates procedure of storages of Danforthon the boat.

Pros. At the expense of the made narrower and sharp paws without effort passes a big layer of seaweed, reaching to soil, besides, perfectly holds a stony bottom with which anchors don't cope with wide paws.

Cons. Narrow paws badly keep in silt and sand. A long rod at an angle of 90 degrees in relation to paws creates inconveniences in work with it on the deck. Assembly and dismantling of this anchor is necessary.

Pros.The main advantages of this anchor can be attributed little weight, swivel legs and high holding power anchor for such class of devices. It is great for a short stay in the sea in favorable weather conditions.

Cons. The main advantages of this anchor can be attributed little weight, swivel legs and high holding power anchor for such class of devices. It is great for a short stay in the sea in favorable weather conditions.

Pros. Among yachtsmen Rocna gained wide recognition for the high holding force and almost instant fence. The main feature of this design is the developed ski lift which carries out a role of a rod.

Cons. Big dimensions at the expense of what it is inconvenient to store.